Gov. Bev Perdue today announced that Marvel Studios’ film “Iron Man 3,” starring Robert Downey, Jr., will start pre-production next month in Wilmington. The motion picture is expected to be made in North Carolina over a 10 month period, including pre-production, principal photography, and wrap, and have an estimated economic impact over $80 million while creating 550 crew jobs and over 1,000 talent opportunities.

“It is great to see the incentive that the bi-partisan legislature passed and I signed into law is doing what it was designed to do, create high-quality, well-paying jobs for North Carolinians,” Gov. Perdue said. “2011 has been North Carolina’s busiest year in the film industry with productions having a direct spend of over $200 million. ‘Iron Man 3′ will add to this record breaking year and carry over into 2012.”

State and local officials have been working with Marvel Studios for over six months on bringing the project to North Carolina. In addition to the state’s 25% film incentive, the state’s talented and trained film professionals as well as the established infrastructure–including the facility at EUE/Screen Gems Studios in Wilmington–all played key roles in landing the production.

“We are very pleased to bring the latest installment in the Iron Man franchise to North Carolina as it offers us filming opportunities that are unique to the area, which ultimately will benefit the film,” said Marvel Studios Co-President, Louis D’Esposito. “Thank you to Governor Perdue and staff for all of their hard work in helping to make this a reality and thank you as well to George and Chris Cooney of EUE/Screen Gems Studios as their efforts have also been instrumental in bringing our production to Wilmington.”

“In 2009, we built Stage 10, one of the largest sound stages in the world in Wilmington,” says Chris Cooney, COO and co-owner of EUE/Screen Gems. “We constructed that space envisioning a motion picture of the caliber and size of this one. This film is a game changer–not only for our studios, but for the entire state of North Carolina. It feels great to bring this project to Wilmington, a place where we’ve invested emotionally and financially since 1996. Today, our vision becomes reality.”

“This will be the largest production to shoot in North Carolina,” said North Carolina Film Office director Aaron Syrett. “The state’s film office now has the tools in place to once again bring North Carolina to the forefront of the film industry thanks to the passing of one of the smartest incentives in the business by our Governor and legislature as well as the relaxing environment that our local governments, businesses and crew base continue to provide to the industry.”

Wilmington Mayor Bill Saffo added, “This is a great day for our state and our region. This announcement means there will be jobs for the film industry and a large economic impact for the region. Through the efforts of the Governor, the Legislature, the North Carolina Film Office, EUE/Screen Gems Studios, the Wilmington Regional Film Commission, Inc., and the local crews, this day is a reality. This is a true public/private partnership.”

The announcement of “Iron Man 3″ coming to North Carolina continues to make 2011 a banner year for the state in the film industry. As of September 10, and not including the “Iron Man 3″ figures, 29 productions have set up offices throughout the state and have had an estimated direct spend in excess of $200 million while creating over 3,000 crew, 500 talent and 21,000 background talent  job opportunities for North Carolinians. Highlights of this year’s productions include the features “The Hunger Games” and “Journey 2: The Mysterious Island” as well as the television series “Homeland,” “Eastbound and Down” and the ninth and final season of “One Tree Hill.” 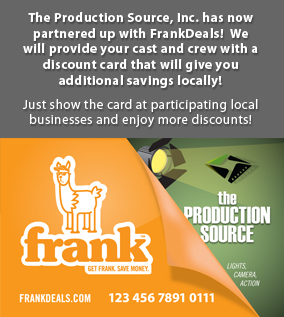 The Production Source has been the extra man on the props team. TPS has made my buying our of state items easy for both my department and accounting. Response to any order I have asked them to fill has been quick, efficient, and hassle-free. Going the extra step, the customer service and helpful attitudes has made The Production Source an invaluable part of getting things done quickly and efficiently in ordering anything needed out of state, or our of country, for any film production need. Thank you for your service and will am looking forward to more work and orders and in the future. — Cat C.- Property Master – Writers